Metrolink will open doors to some of the region’s most iconic visitor destinations including MediaCityUK when the new £350m Trafford Park Line launches on Sunday 22 March.

The launch date announcement comes immediately after the successful completion of the project and handover of the new line to the operator, KeolisAmey Metrolink, whose drivers are currently undertaking a rigorous training programme before welcoming the first passengers onboard.

Metrolink is already the UK’s largest tram network, running to a total of 96km and 93 stops. The new Trafford Park line will add a further 5.5km of track and six additional stops, bringing the total to 99.

The delivery of the new line supports Greater Manchester’s progress towards a London-style transport system. Launched in June 2019, ‘Our Network’ is a ten-year plan to create an integrated, modern and accessible public network – of which further Metrolink extensions and the introduction of tram-train are focal points.

Mayor of Greater Manchester, Andy Burnham, said: “It’s great that the Trafford Park line will open for business on Sunday 22 March. It is a much-needed addition to the Metrolink network and will encourage more people to use public transport to journey around our city-region, and in doing so reduce congestion on our roads and improve the quality of our air.
“Last June I set out Our Network – a vision for the type of world-class transport network I want us to have here in Greater Manchester. This new line is a great step towards that, and a shining example of what we can deliver with the right funding and powers.”

The project was the first to benefit from the region’s Devolution Deal – signed by Greater Manchester leaders and central government in November 2014, with a £20 million contribution from Trafford Council – and has been delivered approximately seven months earlier than originally planned.

The Trafford Park line runs through Europe’s largest industrial estate, providing access to thousands of jobs, including global brands such as Kellogg’s, Unilever, Missguided, L’Oreal and Adidas. The new stops will also provide easy access to some of the North West’s top retail and leisure destinations including intu Trafford Centre, Old Trafford stadium, Imperial War Museum North as well as the creative and digital hub – MediaCityUK.

Leader of Trafford Council, Councillor Andrew Western, said: “The opening of the Trafford Park Line will be hugely important for the continued development of the local and regional economy. It is fantastic news for the tens of thousands of people who come to Trafford Park and the surrounding areas for work and leisure.
“It will also help get more cars off the road as visitors will now have a real transport alternative via Metrolink to some of the country’s most famous retail and leisure destinations including Manchester United and the Imperial War Museum.”

Transport for Greater Manchester’s Chief Executive, Eamonn Boylan, added: “A project of this size and scale is a huge undertaking and we are pleased at how smoothly it’s come together, meaning we’re opening the line much sooner than we anticipated.

“We’re very pleased to be welcoming passengers on board and opening up the Trafford Park area for workers, shoppers and visitors. I have no doubt it’ll make a huge difference to the area, particularly to the many local businesses.

“One particularly exciting partnership we’ve developed has been with intu Trafford Centre, and we look forward to growing our relationship in the years ahead.”
The mutually-beneficial deal between intu Trafford Centre and TfGM offers them opportunities to promote their leisure and retail destination alongside TfGM – the commercial income generated will be reinvested back into the Metrolink network.

Find out more about the new Trafford Park Line on the MediaCityUK transport website. 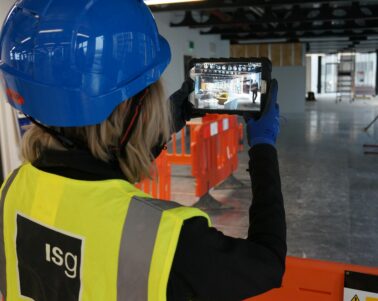 ISG has announced its move to MediaCityUK as it eyes growth for its North West business. The construction services business,… 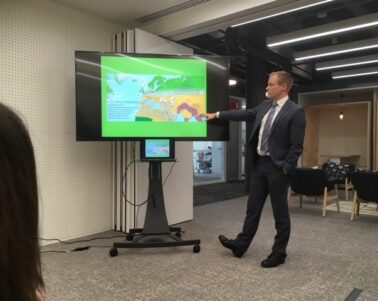 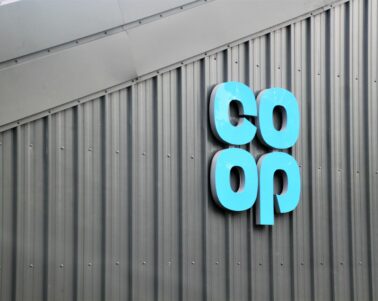 The new-look 7,532 SQFT store in MediaCityUK will run on 100% renewable electricity. It will include: coffee; bakery, fresh, healthy…

Lowry Outlet has revealed fashion retail giant Next as its latest signing. The store is set to open in early November 2015 at what is Manchester’s only outlet complex, located in the heart of MediaCityUK.