Writer/Director Phil Hawkins and Exec Producer Gary Cowan from Velvet Film in MediaCityUK’s Blue Tower have directed and produced ‘Star Wars: Origins’ which takes a look at where it all began.

A thrilling action-adventure, this film draws inspiration from both Star Wars and Indiana Jones to tell an epic story based on Earth during WWII.

Star Wars: Origins premiered globally on 12th December 2019 a week before The Rise Of Skywalker exclusively at YouTube.com/starwarsoriginsfilm. 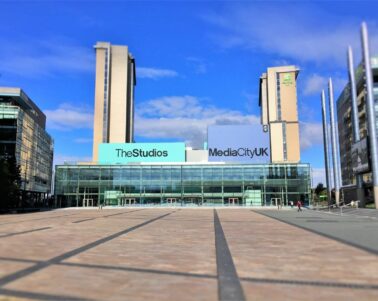 dock10, the leading media services provider based at MediaCityUK, has announced the launch of field dock, its new remote ingest service. Field dock is aimed at the broadcast and other high end video markets and is intended to be used by productions on location.

A festive sculpture trail is to take place around MediaCityUK this Christmas to celebrate the 40th anniversary of Raymond Briggs’ heart-warming picture book The Snowman. This is the first time that a sculpture trail inspired by the nation’s favourite Christmas story has ever been created.

BBC North and MediaCityUK is gearing up for its Sustainability Season which will run from Monday, 26 February to Friday,…